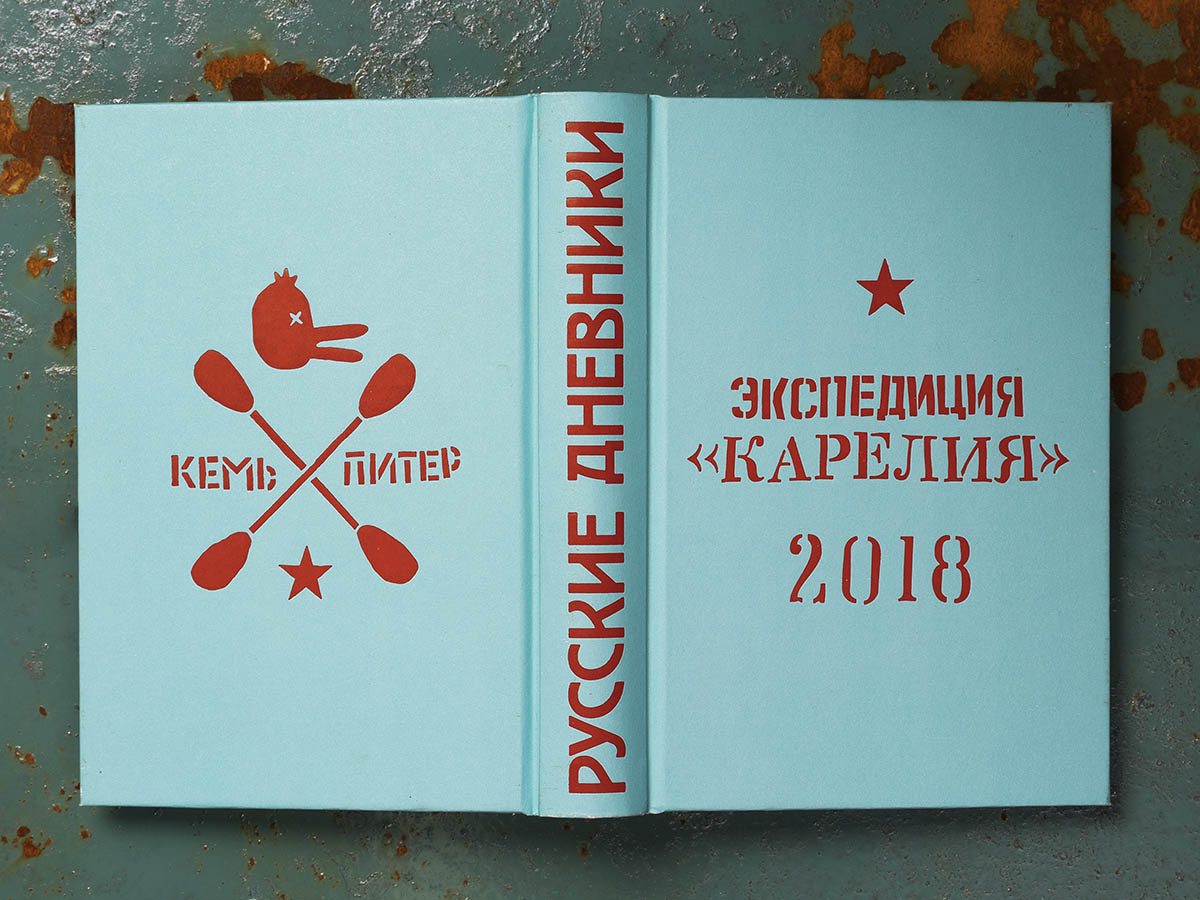 This is a piece of design most of our readers will never see.

Unless you are one of the freaks who throw away the dust jacket of a book after purchasing it. Which is an act highly condemned by any person in their right mind. Especially book designers.

But as most of our readers will not engage in such atrocities, they will unfortunately be deprived of the joy that ensues from this hidden visual presentation.

This is thus the reason we chose to display this part of the book instead of the cover you will encounter when actually getting hold of the volume under consideration.

Leka will now tell you what you are looking at:

So glad you could join me! I promise this presentation will be a real treat for those engrossed in the world of typography. And who isn’t?!

Let’s begin, shall we?

On the spine you can see a text set in what is referred in the Weilin & Göös A.B. type specimen catalog as Rysk halffet Secession Grotesk. It was in the same specimen book that I was able to find a (somewhat limited) set of cyrillic letters set in Secession that I had not known of previously.

It is a beautiful face, bearing faint traces of jugend stil without being all flamboyant about it. According to information found on the Fonts In Use website Secession was originally jointly released by Bauer & Co. of Stuttgart and H. Berthold AG of Berlin around 1898.

As you are able to see, the text is set from the tail of the book to the top, contrasting it with books produced in English, in which the text is set the other way around.

I’ve been told that the reason for this is that if the book is placed on the table face down, the spine can still be read without any trouble. While I do not know if this is true, it in the very least makes for quite a good argument. (That the Germans and French follow the same logic in their book design is also worth noting.)

On the front cover you can see a reproduction of the typography found on our expedition flag. It shows my great love for stencil typefaces, seen here as originally hand cut out of fabric.

The theme of stencils continues on the image on the back cover (which also served as the flags backside, as can be seen in the photographs found on the Journey section of this site) with the skull of a duck and two paddles taking the place of the more commonly used cross bones. All this to declare the death-defying aspect of our great expedition!

The background color is one anyone who has ever travelled in Russia will surely recognize. I recall being told that they even used this color on the instrument panels of their fighter jets, as it was understood to be ensuring optimal performance psychologically speaking. Again, I do not know if this is true. But if you ever encounter a photograph of the cockpit of a MiG-21, you will find it to be of (roughly) the same color!

So that is the story of the cover of our beautiful little book. I hope you enjoyed this presentation!”

We’ll allow Leka to continue his discourse on design for a few more lines. Please bear with us!

”Our favorite spot in St Petersburg is not the The State Hermitage Museum nor is it the Church of the Savior on Blood, though both rank pretty high on our lists of things to see.

No, our number one destination in the city is far less refined or cultured. The place to be for us is a muddy field off center where the Udelnaya open air flea market hosts its diverse and unique clientele. There is a real feeling of discovery and adventure at the Udelka, much akin to that of our journey itself, but in a less controlled way.

One can find anything at this market!

And that is why it has become our go to place whenever we are in Pitr.

This time we had to control our impulses, as not to purchase too much and end up not fitting in our ride back home. Still, who could possibly say no to a Soviet era mail box? Or a beautifully gaudy wool scarf from the 1950’s? (At least that was how the item in question was presented to us, we have no idea what percentage, if any, of this fabric is actually wool. But that really doesn’t matter one bit. Wool or no wool, the charm of this scarf relies not on such mundane considerations.)

For us the scarf was a perfect fit for the end papers of the book as well as background pattern for the poster we made in conjunction with the publishing of our diaries. it was a part of our journey, and we felt that it was not only for us to enjoy, this old scarf, it was to bring joy to everyone around us!” 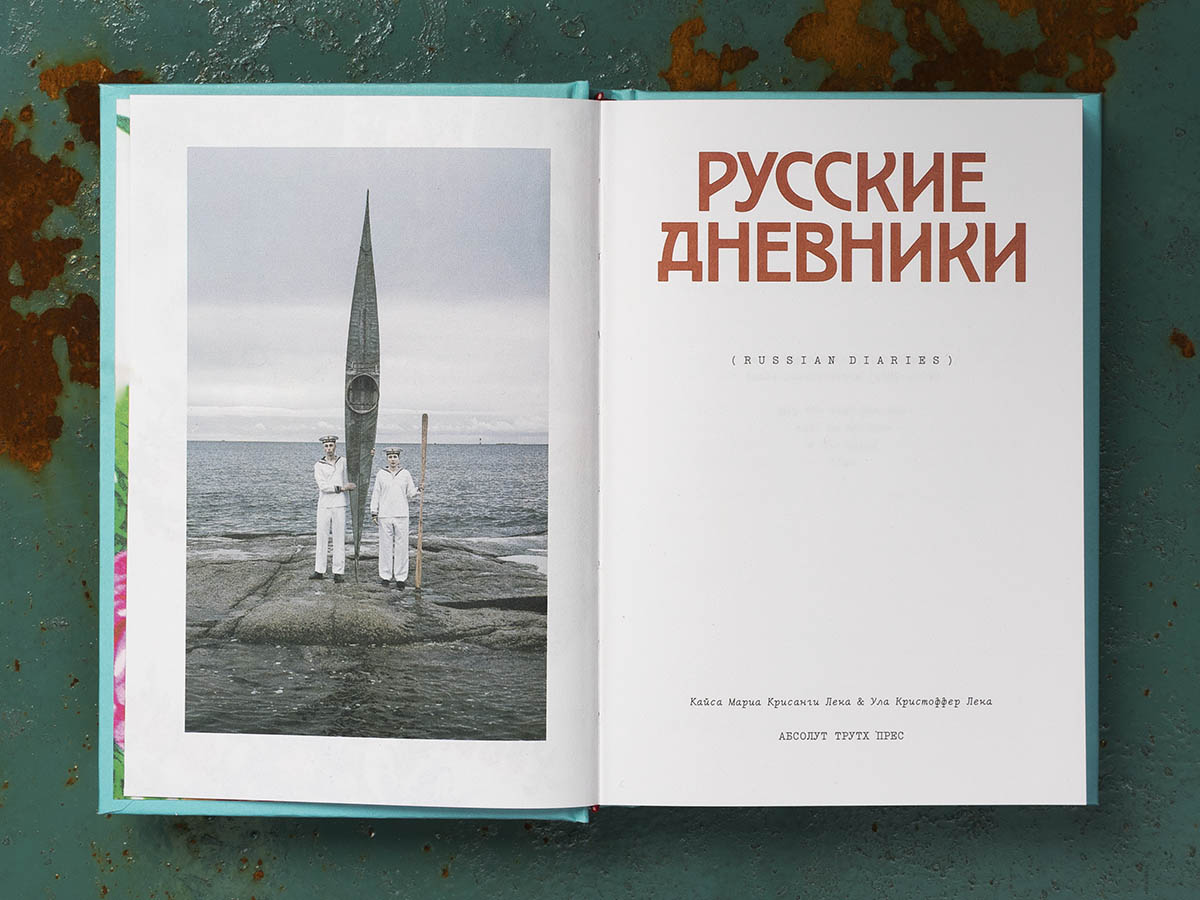 Here you can see the frontispiece and title page of our little book.

It invites you to dive into a world of exciting adventure and sublime thought all while offering you a short moment to catch your breath before the polymorphous exhibition of words and images that is Kaisa’s art animates your entire being.

This is Kaisa’s rendition of the ideal campsite, with pine trees to hang hammocks from, soft mossy ground to pitch a tent on, a sandy beach to park the kayaks on and sturdy logs to sit on. Finding a place like this, preferably early enough so Kaisa would have enough time to fill out a couple of pages in her notebook, was our daily ambition.

It was achieved at varying levels of success, which are reflected in the quality and quantity of Kaisa’s notes. In this case we had clearly managed to set up camp well before weariness had had a chance to set in. 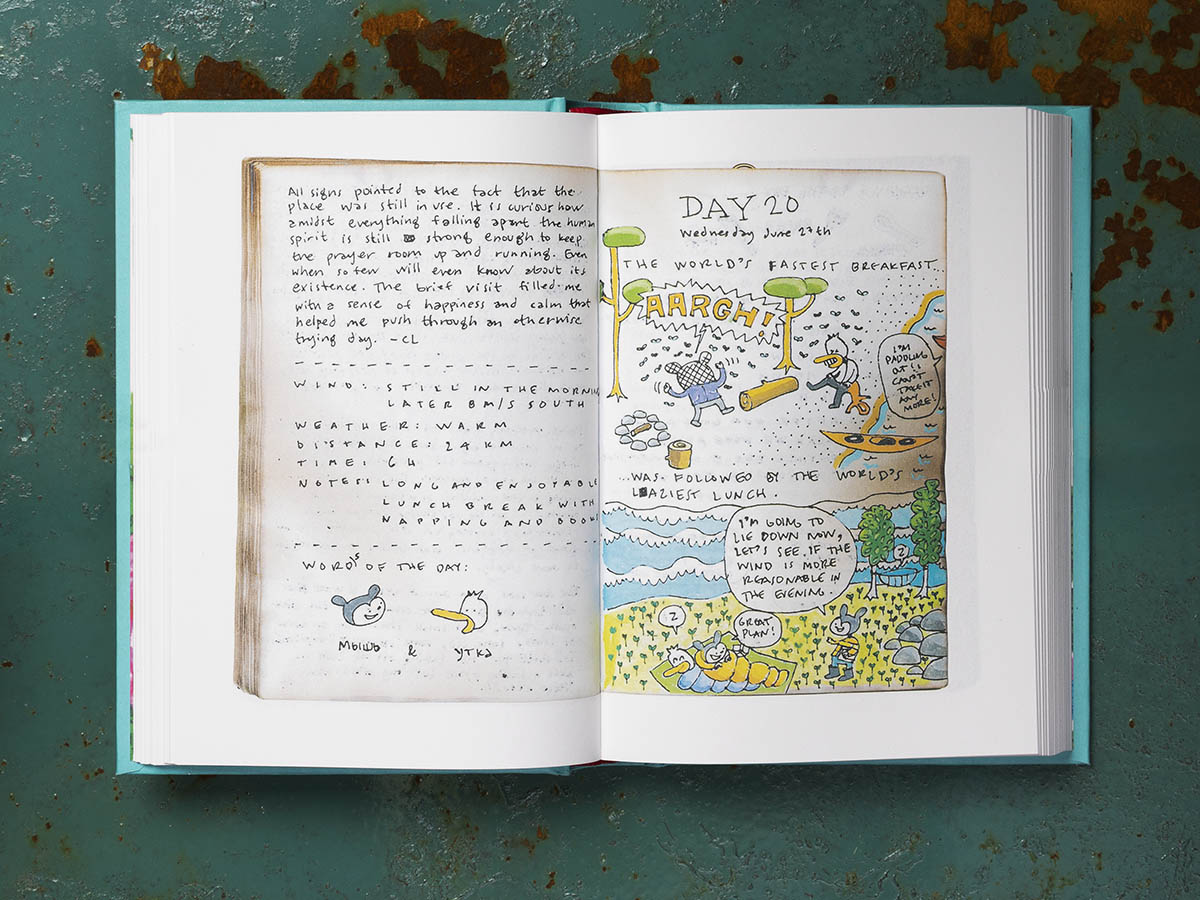 A few crucial statistics were recorded in the notebooks every day: wind, weather, distance, time and special notes. Kaisa also wanted to expand her vocabulary, or remind herself of words she had learned previously but forgotten, so the inquisitive reader is provided an opportunity to dive into the Russian language. 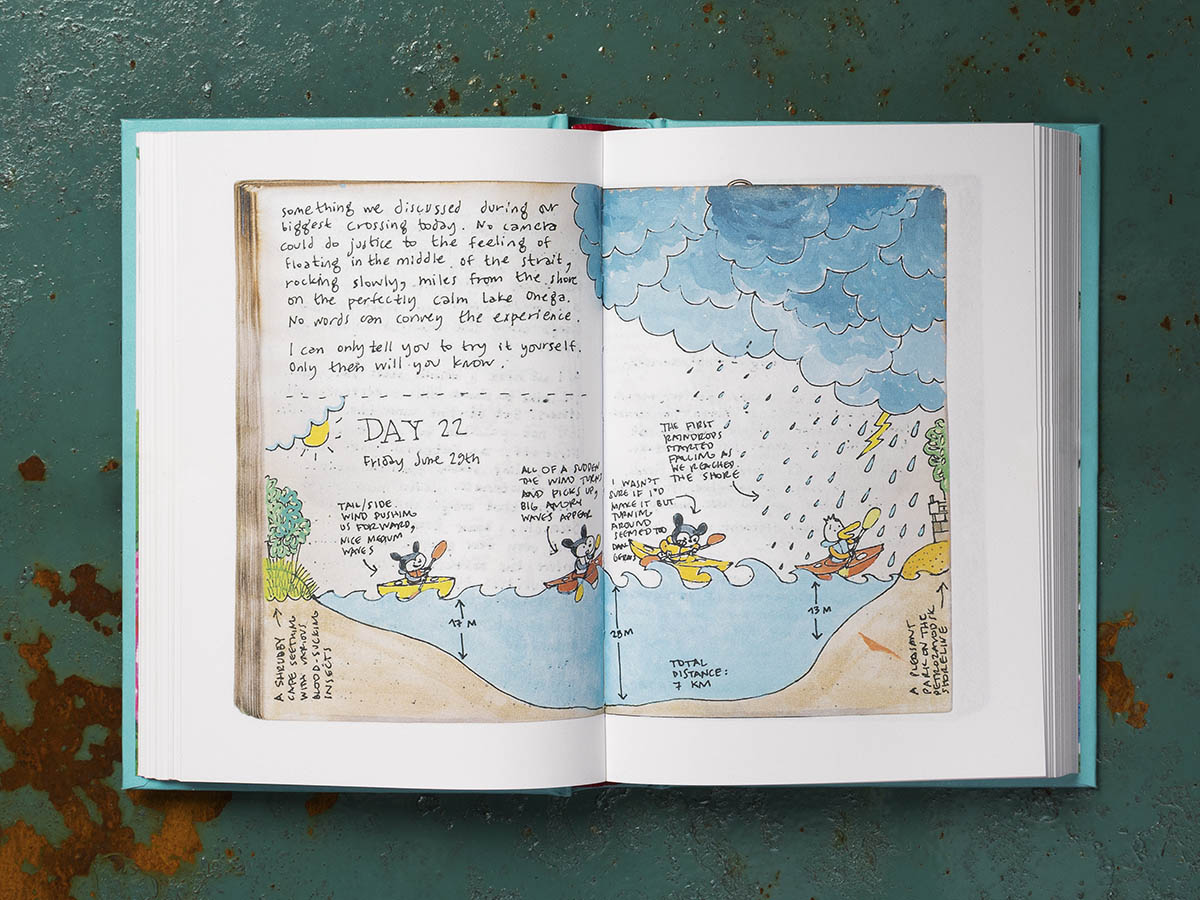 A more detailed description of the dramatic events leading to our arrival in Petrozavodsk can be found in the section titled The Journey, but this helpful chart will provide readers with an overview of the bay our team had to cross to reach the city.

Please note that the drawing isn’t made exactly to scale, as the width of the bay is seven kilometers and depth 28 meters. The rest of the details are, however, captured in the most realistic manner. 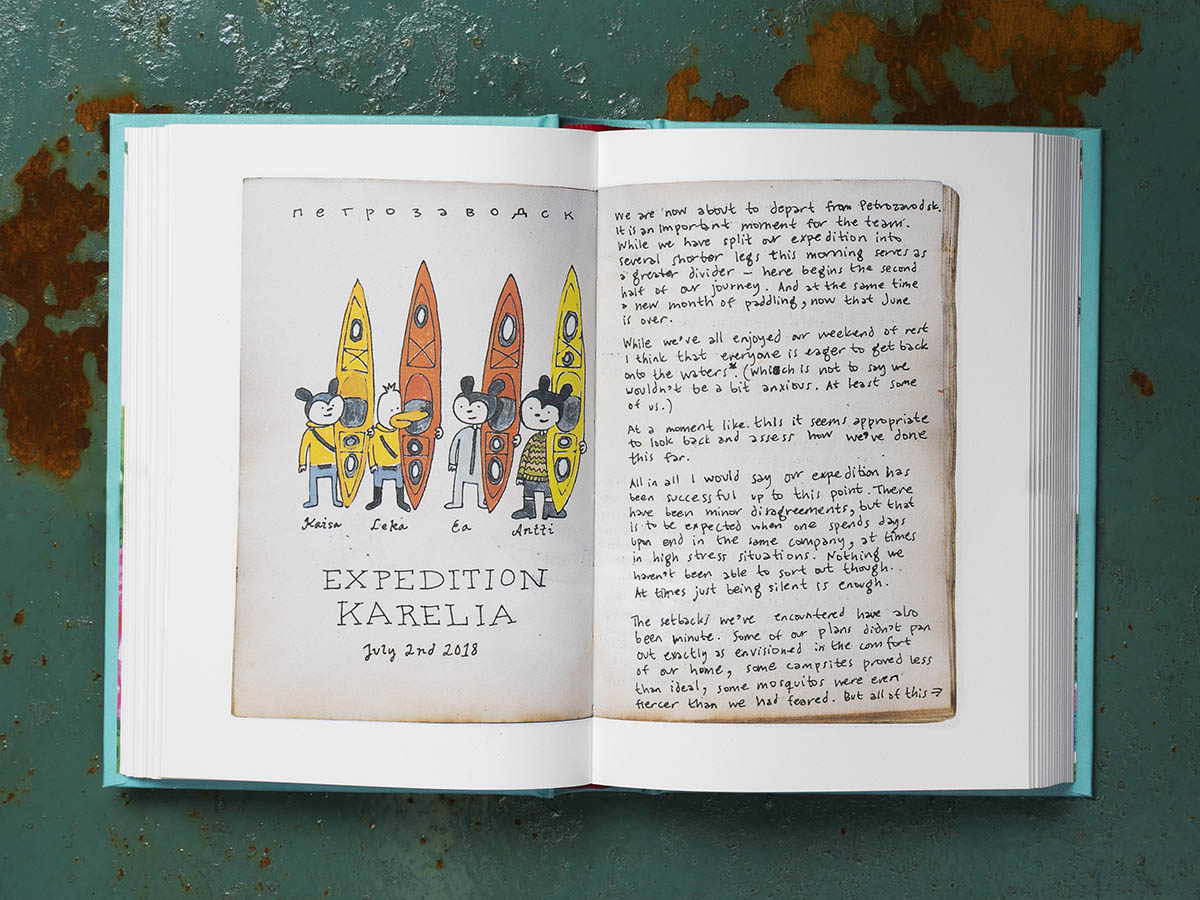 Readers may wonder about the different lettering styles used throughout the book. Some of them are used purely for decorational purposes, which typically meant that Leka would sketch an elaborate and graceful title on a piece of paper and propose to Kaisa that she recreate it in the notebook, leading to Kaisa declaring that it would be best if Leka started a notebook of his own.

However, some of the different styles have a clear function, such as the one we see here on the right. When text is printed in this manner, with both upper and lower case letters, it signifies that the text in question has been authored by Leka, although written here by Kaisa. And text written entirely in block letters is both thought of and penciled by Kaisa. Unless Kaisa was tired when fulfilling her daily quota of note-taking, in which case anything is possible.

One might wonder how it is even possible to keep a diary on a trip like this? Won’t the long hours spent battling the stormy seas tire out the traveler to the extent that they find themself utterly unable to put pen to paper, not to speak of creating texts and images worth publishing?

The answer lies within the very same seas. While a cyclist will force themself to push through the most vicious winds a paddler must, at risk of mortal peril, often stay ashore. And as we can see in the illustration to the left these moments are perfect for many activities such as reading, napping, snacking as well as note-taking. As for the latter question, we leave it to our esteemed readers to decide whether the time and funds spent publishing these notebooks would’ve been better spent elsewhere.

Continuing on the same theme, the key to the success of any endeavor, be it physical or mental, is consistency. A daily regime of small steps towards our goal will over time lead to tangible effects. As a wise person said, you can sit and try to watch bamboo grow and it will appear as if nothing is happening, or you can come back in a week and see that it has indeed taken a leap in growth.

At the same time it should be noted that absolutely nothing will be achieved on an empty stomach, and therefore multiple warm meals as well as snacks were included in our schedule.

Kaisa abhors photorealistic drawing, which she feels is a cheap trick used to cover up the fact that the artist has nothing to say. But over the last decade she has relented a bit, and will now admit that a travel diary may benefit from a few images depicting the views in more detail. So please enjoy this illustration of the rustic wooden lighthouse situated on the easternmost point of our trip! 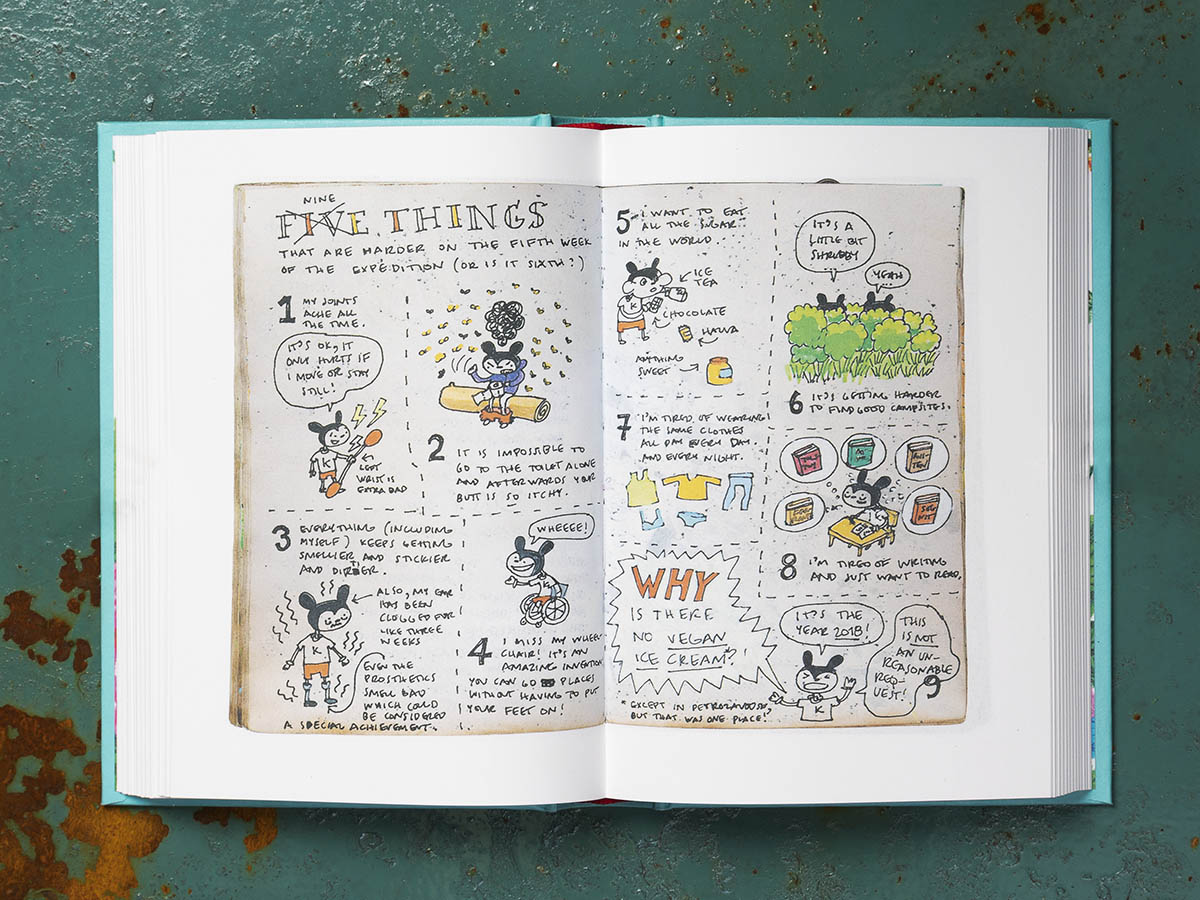 Lists are so much fun to draw! Some days earlier Leka as the eternal optimist had created a list of things that get easier as the expedition moves on, so Kaisa wanted to make a list of her own. And naturally it became a report of five things that had gotten harder, which then expanded into nine things that were seriously getting on Kaisa’s nerves.

And yes, Kaisa is very well aware of the fact that she is a spoiled brat, and that you can’t really expect to find vegan ice cream in small Russian villages. But one can always dream! 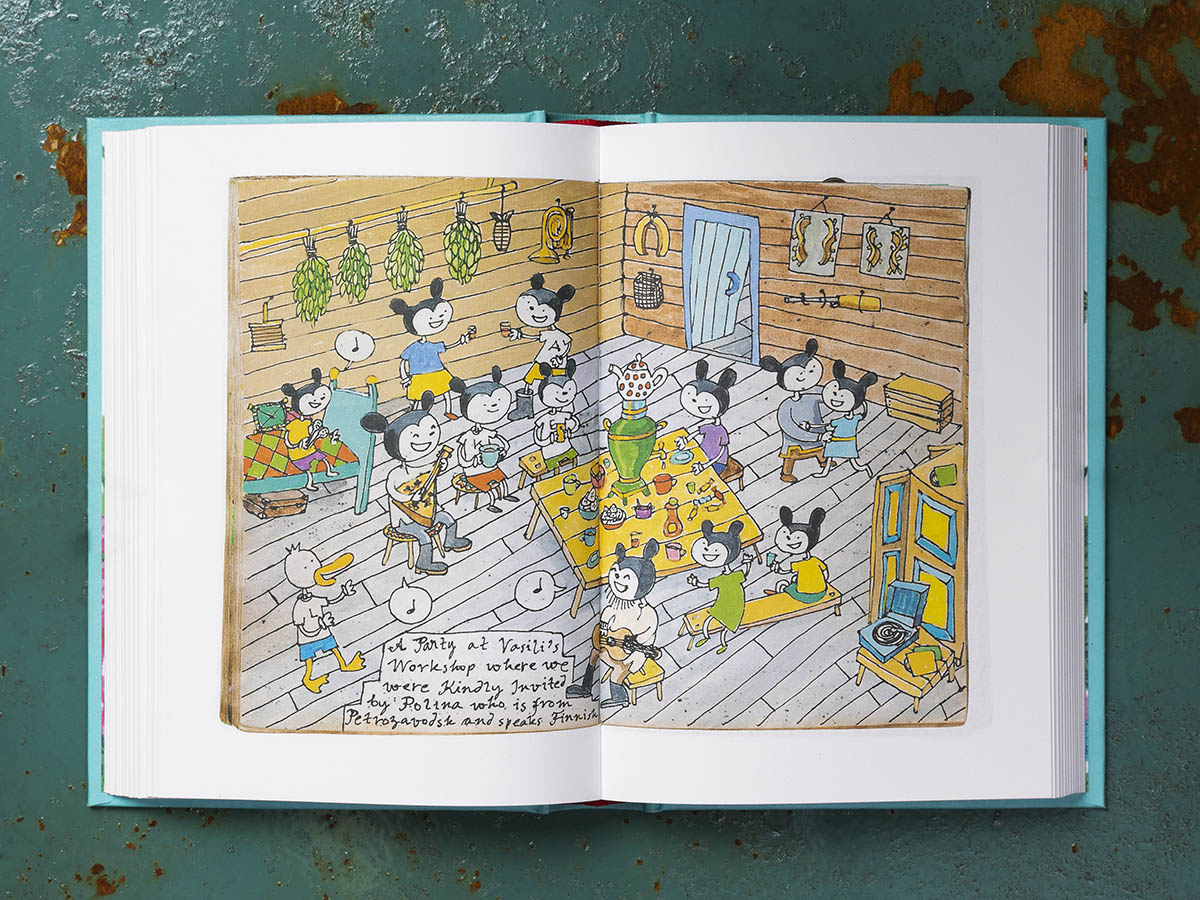 This space contained many things that posed serious challenges to Kaisa’s drawing skills, such as large amounts of people in movement, archaic musical instruments and various agricultural tools that she had absolutely no names for and was therefore unable to research afterwards. But here’s a pro tip for all you aspiring comics artists out there: if you fill up a spread in a book with a multitude of details most readers will never look very closely at any of them. Instead they’ll just admire the amount of stuff you’ve managed to pack into one drawing, and mistakenly consider you a master of markers, a virtuoso of verisimilitude. 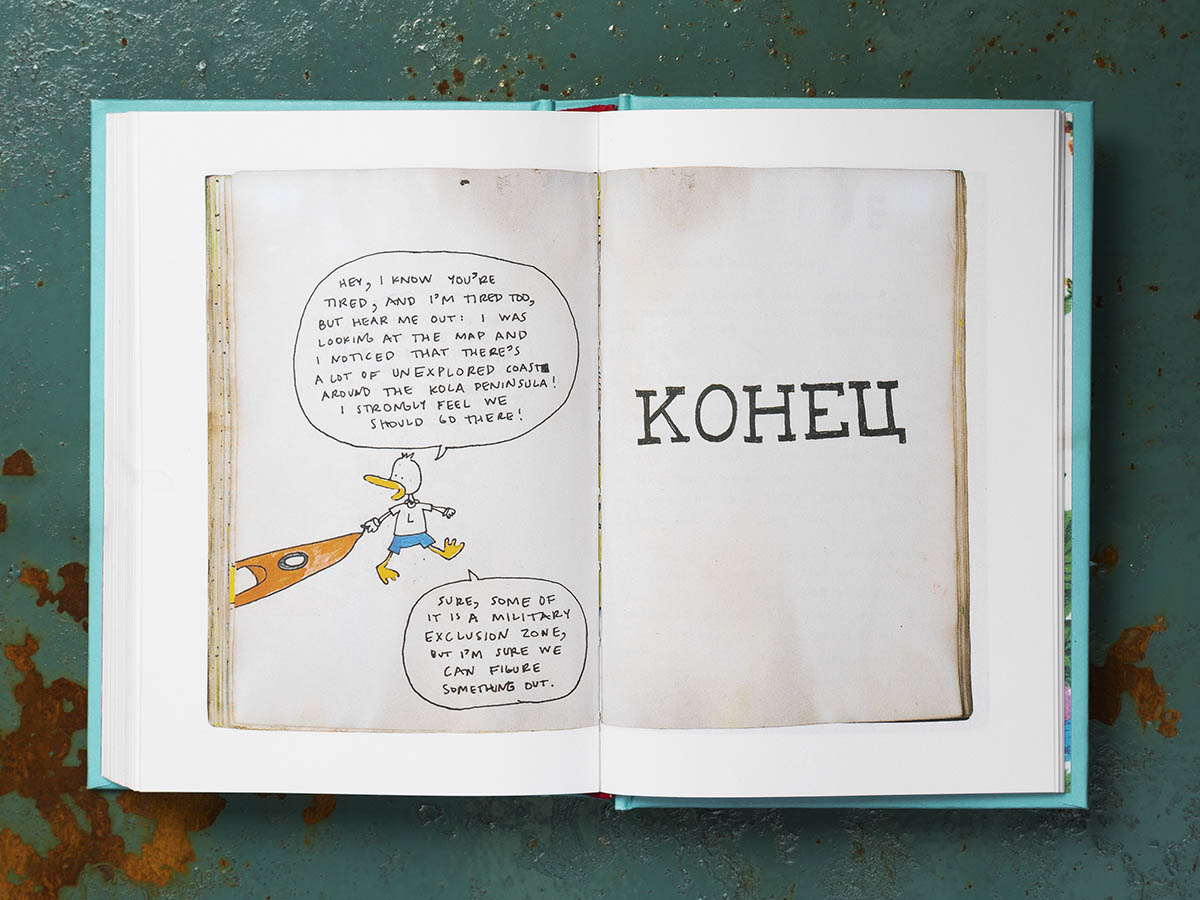 The end. Or not. Kaisa was ready to sink the kayaks in the canals on St Petersburg (and throw the notebooks along to keep the vessels company) but as plastic doesn’t really stay underwater the ships returned home and it didn’t take long for them to touch water again. Leka is forever filled with new plans and is probably looking at a worn-out map, printed some time before the 1950s, even at this very moment.

Besides the travel diary itself the book also contains several useful appendixes describing the expedition members, their route and the equipment transported in the surprisingly capacious vessels. Depicted here is Kaisa’s kayak, which contained items traditionally considered as valuables, such as passports and money, as well as items equally valuable for the successful completion of this type of a journey, such as candy and books.

We use munchies aka cookies to ensure that we give you the best experience on our website. If you continue to use this site we will assume that you are happy with it.OkPrivacy policy